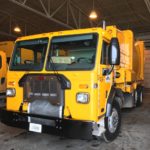 Robots are taking over the streets of Muscatine! No need to worry, it’s not as if alien decepticons are plotting to conquer the city, it’s just two new automated garbage trucks that are prowling the pathways with their robot arms muscling up the refuse. The first of the two was unveiled in December 2015, the second in February 2017, making up two of the five trucks in use for Muscatine. The other three still use the tried-and-true method of human garbage people hanging off the back of the truck, chucking trash into its waiting maw. But this new means of technology means that those far riskier... Read More