Robots are taking over the streets of Muscatine!

No need to worry, it’s not as if alien decepticons are plotting to conquer the city, it’s just two new automated garbage trucks that are prowling the pathways with their robot arms muscling up the refuse. 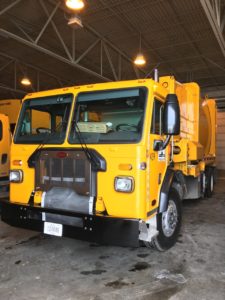 The first of the two was unveiled in December 2015, the second in February 2017, making up two of the five trucks in use for Muscatine. The other three still use the tried-and-true method of human garbage people hanging off the back of the truck, chucking trash into its waiting maw.

But this new means of technology means that those far riskier days will be coming to an end, which benefits both the city and allays injury concerns for those currently tasked with trashing the trash.

“The jobs that were lost from automation were temp jobs, there were no full-time or part-time city jobs lost in the transition,” said Kristy Korpi, interim solid waste manager for the city. “The reasons for automated collection include reduced injury for employees, increased crew efficiency, and improved neighborhood aesthetics.”

The cost of the automated truck delivered to the city in February 2017 was $239,957. The truck that the city traded in was a 2001 model which had given Muscatine 16 years of service, so they anticipate that the truck will certainly pay itself off in years to come and end up being a cost benefit for the city, in addition to being a technological advantage and a boon to employees, Korpi said.

“It’s a much safer way to have trash collection,” Korpi said. “Garbage collection is very accident prone. There are items in the trash that can cut people or injure them. There’s hazardous waste that people throw away. There are also a lot of other safety concerns. We have containers that are 35 to 95 gallons and they can be difficult to lift and that can cause injury. There can be injuries due to traffic, because people will follow too close to the garbage trucks, or the drivers won’t see the people in the back. So overall, this is definitely for the best when it comes to safety for those people working on the trucks.”

The drivers are certainly pleased with the change, Korpi said.

And customers are likewise happy with the shift, once they get used to the new containers, which can be wheeled out to the curb.

“It’s a terrific improvement,” Korpi said. “It took a little while for some people to get the right cart sizes for them, but overall the feedback has been positive.”

Citizens in need of manual removal of items can request special pick-ups three times a year, particularly for furniture, larger items, electronic waste and the like, Korpi said.

“They’re getting the same quality service they always have,” she said.

“Ultimately, this is much easier, and is going to be much easier,” Korpi said. “The carts are less likely to be tipped, there are going to be far fewer accidents or people hurt on the job, and I think it’s going to be great for the city.”

So why not replace all the trucks at once? Economics. The city has trucks in its fleet that are 2006, 2007 and 2009, and the trucks are replaced as they die or become cost-prohibitive or obsolete, so another new truck won’t be coming for a while, Korpi said.

So you don’t have to worry about a complete robot takeover.

For a while, at least.

Sean Leary is an author, director, artist, musician, producer and entrepreneur who has been writing professionally since debuting at age 11 in the pages of the Comics Buyers Guide. An honors graduate of the University of Southern California masters program, he has written over 50 books including the best-sellers The Arimathean, Every Number is Lucky to Someone and We Are All Characters.
Tagged: garbage trucksMuscatinetrash trucks