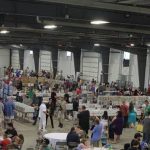 On Saturday and Sunday this Labor Day weekend was another Mighty Con. This time no one had to worry about the air conditioning going kaput, because it was held at the QCCA Expo Center which doesn’t have air conditioning. Which is definitely a creative way to address complaints. All kidding aside it was a decent weekend both for the convention itself and on a personal level. I arrived at the con early on Saturday, partly because I was with other people, partly because I had other things going on that day and needed time to get them all done and partly because we were aware that Saturday was... Read More