Quad-Cities-based Mid America Premier Red, the top-ranked U10 youth soccer team in the Midwest, began its 2018 outdoor tournament season in winning fashion, with resounding thumpings of teams from throughout Illinois in the John Gaspar Soccer Tournament, including a demolishing 15-3 win in the title game.

In the Saturday afternoon game, it was more of the same, as the Premier boys slogged through a muddy field in a messy game that nevertheless ended with the same score, 8-3 to Premier. Zulu knocked in three for his own hat trick, DeLaCruz had two, Leary and Wehr one, and Caras-O’Neal rounded it out with one of his own. Leary tallied three assists and Cortez two.

In both games on the slick fields, defense was key, and MAPS back line of goalie Sayden Williams, and sweepers Cooper Barnes and Adam Donaldson, along with midfielder Antonio Sepeda were nails in locking down the other teams despite the difficult terrain.

It was more of the same on Sunday, in day two of the tourney. 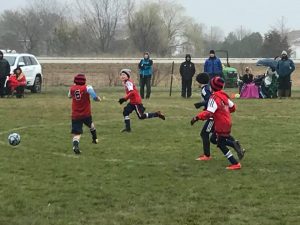 The semifinals started early and not-so-bright as icy rain and snow fell onto the already muddy fields and Premier shivered out a 4-0 win in the semifinals. Defense was likewise key on the gloomy day, with MAPS scoring the blank sheet with gritty play and hard work. 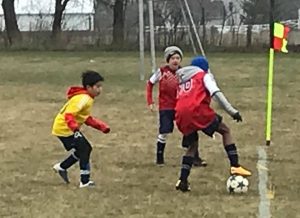 After that challenge was overcome, the championship game was a surprising laugher for the boys. Their opponents scored first, with a muddy misstep by Williams leading to an easy tally  and a 0-1 hole just a few minutes in. But it was the barest flicker of hope given to the opposing team, as MAPS quickly exerted their dominance and showed, without a doubt, who was going to be walking home with gold on this day. Superior ball movement and power by the Premier squad knocked the score up to 5-1 within minutes and then it was cruise control and time to have fun the rest of the way, as MAPS opened up the doors to a 15-3 rout. Zulu had five goals, DeLaCruz four, Leary three, Wehr one and Barnes and Williams joined in on the fun, moving up from their defensive spots to play dual forwards and smash in goals of their own. The Mid America bench and team erupted in cheers as Barnes drilled in his penalty kick as the time ran down, putting a triumphant cap on another championship weekend. 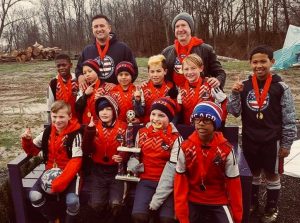 For more information on Mid America Premier, including how to try out and join the teams, see https://www.facebook.com/midamericapremiersoccer/ .

Sean Leary is an author, director, artist, musician, producer and entrepreneur who has been writing professionally since debuting at age 11 in the pages of the Comics Buyers Guide. An honors graduate of the University of Southern California masters program, he has written over 50 books including the best-sellers The Arimathean, Every Number is Lucky to Someone and We Are All Characters.
Tagged: Illowa leagueJohn Gaspar Soccer TournamentMid America PremiersoccerU10 soccerWashington