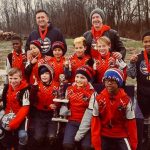 Quad-Cities-based Mid America Premier Red, the top-ranked U10 youth soccer team in the Midwest, began its 2018 outdoor tournament season in winning fashion, with resounding thumpings of teams from throughout Illinois in the John Gaspar Soccer Tournament, including a demolishing 15-3 win in the title game. Playing in horrible weather conditions throughout the weekend, MAPS began action Saturday morning, ripping through biting wind and pelting rain to shellack their first opponent, 8-3. Connor Wehr poured it on for Premier with a hat trick, nailing all three goals in the second half, and Lawson... Read More