The 08 East Moline Silvis Soccer Club Spartans were already ranked in the top 15 in the state going into the Muscatine Soccer Club tournament June 9, and after a thoroughly dominating performance, it’s justifiable to see them chasing a top ten ranking soon. 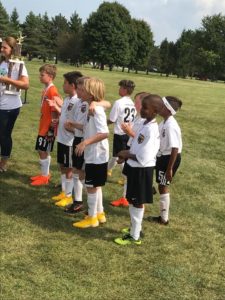 The Spartans completely demolished their opponents, outscoring AYSO, Quad Cities Rush and the home team of Muscatine Soccer Club by a combined goal total of 18-1.

They say defense wins championships, and it was defense that led the way to EMSSC’s slaughter of their opponents. The scores were only part of the story, as the point differential could’ve been far higher given EMSSC’s dominance of possession and the opponents’ inability to get the ball into the Spartans’ zone.

The Spartans came out rocking with relentless hustle and ferocious defense against their first foe, AYSO, with rugged goalie Zzylur Thomas and tough-as-nails defenders Xavier Marolf, Baylor Smith and Connor Wehr acting as a brick wall in the back, as stopper Eli Nache and midfielders Jonas Cortez and Jackson Leary ripped through the middle of the field to take down any threats, and led the counter-attack with striker Elijah DeLaCruz. The 8-1 score wasn’t even indicative of how lopsided the win was, as the Spartans showed strong balance on scoring, with six different players – Smith, Nache, Wehr, Marolf, Leary, Cortez, and DeLaCruz with two – netting goals, and pretty much every player on the roster getting shots off. 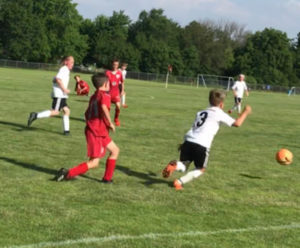 It was more of the same against the Q-C Rush, as the Spartans tore through them with little resistance. DeLaCruz scored a few minutes into the game, fireballing a shot off a pass from Leary, who took the outlet pass from Nache, and it was a fast 1-0. Leary got on the board just a few minutes later, taking a clear from Marolf, then nutmegging two defenders before drilling a shot to the far corner for a 2-0 lead. Nache made it 3-0 with a screamer from outside the 18 that shredded net, and the romp was on. Cortez knifed through the defense and put one far side for 4-0, and the DeLaCruz/Leary connection struck again on goal five, as Leary crossed over to the forward, who zig-zagged through two defenders and laced one far side to make it 5-nil. The Spartans played keep-away the rest of the way and closed it out easily. 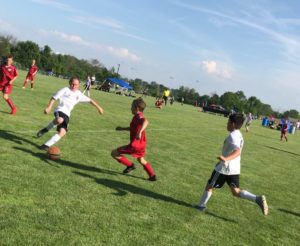 The championship promised a tougher game, as Muscatine is a brutal, physical team that likes to mix it up and smash around opponents, but the Spartans’ combination of physical play, speed and skill overwhelmed them quickly. Nache and Smith scored to put the Spartans up 2-0, Junior Solis got on the board off a nice pass from Leary to push it to 3-0, Izzy Bailey took a pass from Cortez and set it topside to make it 4-0, Leary bounced off a defender and lasered a through ball to Marolf for 5-0 and DeLaCruz added the icing on the cake for 6-0 and the trophy.

The Spartans seem to be gaining chemistry with each successive tournament, and with points still waiting to be added to their team ranking, a climb into the top 10 in the state looks solid for the future.

Sean Leary is an author, director, artist, musician, producer and entrepreneur who has been writing professionally since debuting at age 11 in the pages of the Comics Buyers Guide. An honors graduate of the University of Southern California masters program, he has written over 50 books including the best-sellers The Arimathean, Every Number is Lucky to Someone and We Are All Characters.
Tagged: Armed Forces CupEast MolineEMSSC Spartanslocal soccerMoline