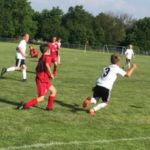 The 08 East Moline Silvis Soccer Club Spartans were already ranked in the top 15 in the state going into the Muscatine Soccer Club tournament June 9, and after a thoroughly dominating performance, it’s justifiable to see them chasing a top ten ranking soon. The Spartans completely demolished their opponents, outscoring AYSO, Quad Cities Rush and the home team of Muscatine Soccer Club by a combined goal total of 18-1. They say defense wins championships, and it was defense that led the way to EMSSC’s slaughter of their opponents. The scores were only part of the story, as the point differential... Read More