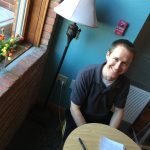 One of the most valuable treasures of humanity, free thought, is priceless. And that golden commodity of the intellect is what is most prized by a local group, the Muscatine Society of Freethinkers. The loosely formed organization, begun by Travis Glynn two years ago, has offered a number of get-togethers, seminars, events and discussions since its inception. “We started a facebook group four years ago, then started having meetings after that and now we’re up to about 55 people,” Glynn said. “It started with an idea of mine about three years ago to get people together who were like minded... Read More 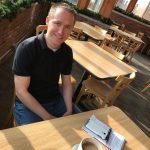 Travis Glynn is soft-spoken and quick to smile as he sips his coffee from a large mug at Elly’s in downtown Muscatine. He’s talking about his family, one of his favorite subjects, and the winter holidays, but he speaks with the same consideration and compassion on most topics, displaying the humanity and courtesy that informs his life and pursuits. Glynn has been involved in various progressive causes over the past decade in Muscatine, but he’s far from the stereotype of the strident radical. He’s extremely low-key and polite, is deliberate and quiet in listening to different viewpoints,... Read More