‘Bohemian Rhapsody’ Lost Its Critics In A Flash

There were few Best Picture nominees at the Oscars this year more divisive than the Queen biography, “Bohemian Rhapsody.”

Critics, fans of the band and people who like to get irritated on social media were brutally torn up over the film, with several of them calling it “problematic.”

I couldn’t agree with you more.

Having seen “Bohemian Rhapsody,” I likewise found myself offended.

Predominantly for one reason.

THEY DIDN’T INCLUDE ANYTHING ABOUT THE SONG “FLASH” FROM THE MOVIE “FLASH GORDON” IN “BOHEMIAN RHAPSODY.” 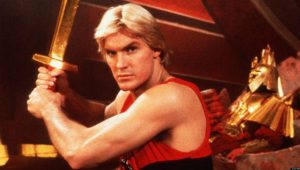 I’ll let you take a moment.

Yeah, I don’t know how you can tell the story of the band Queen without including a scene where the band composes and performs not only their greatest song, but really, what is universally regarded as probably the best song ever made (yeah, F you, Beethoven, and F you even more Sammy Hagar, I said it. If it makes you feel any better, I’ll admit that Symphony No. 5 and “Heavy Metal” are probably a distant second and third.)

I mean, here you’ve got TWO WHOLE HOURS to tell the story of this band, and instead of including all this boring stuff about the group getting together and Freddie Mercury having to struggle through bigotry and homophobia and AIDs and the big concert thing whatever it is where there’s some charity thing going on, blah blah blah how about some goddamn “Flash Gordon????”

He’s the savior of the universe!

He’s king of the impossible!

He’ll save EVERY one of us – even the makers of this film that ignored him!

AND, AND, AAAAAAAAND ON TOP OF ALL THAT,

Now, listen, I know I’m not the only one out there who feels this way.

So does Sam Jones.

So does Melody Anderson.

So does Ornella goddamn Muti!!!!

Jesus, Suzanne Danielle and John Osbourne are on board with this!

I mean, it’s bad enough that “Bohemian Rhapsody” censored out the scene where Freddie Mercury exchanges a provocative glance with a swarthy trucker and follows him into a bathroom, and the damn movie cuts away from that scene instead of showing us what happens in that bathroom.

But what happened in that bathroom?

That’s right, you got it.

That’s the bathroom where the trucker introduces Freddie and David Bowie to freakin’ Vanilla Ice, who then gives them the riff for “Ice Ice Baby,” which Bowie and Queen borrowed to write the far inferior “Under Pressure,” which was an ok song, but let’s face it, not what you really need to be playing when you’re rollin’ in your 5.0 with the ragtop down so your hair can blow.

Especially, ESPECIALLY, when the girlies are on standby, waving to just to say hi, and well, instead of stopping, you make the challenging yet provocative decision to just drive by.

So, yeah, I know a lot of people were already ticked off about THAT scene being heavily redacted.

How can you call this a TRUE biography of Queen????

It’s almost as if it’s just a movie made up by some screenwriter who was trying to cram two decades of band history into a two-hour film!

But in that two-hours should’ve been one thing.

Sean Leary is an author, director, artist, musician, producer and entrepreneur who has been writing professionally since debuting at age 11 in the pages of the Comics Buyers Guide. An honors graduate of the University of Southern California masters program, he has written over 50 books including the best-sellers The Arimathean, Every Number is Lucky to Someone and We Are All Characters.
Tagged: Academy AwardsBohemian RhapsodyBrian MayFlash GordonFreddie MercuryJohn DeaconMelody AndersonOrnella MutiOscarsQueenRami MalekRoger TaylorSam JonesSean Leary