The Man in Purple: Norman Baker Documentary Showing at MCC

Entrepreneur, radio personality, and cancer quack during the 1920s and 1930s—Norman Baker was a master propagandist with a populist flair.

The Man in Purple: Norman Baker, directed by Chad Bishop, will be shown at Muscatine Community College (152 Colorado Street Muscatine) this Friday Feb 1 at 7 p.m. 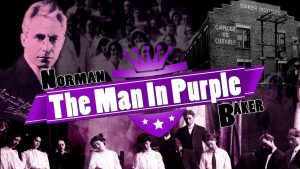 Norman Baker cast himself as a common folk crusader battling against big business, big government, and big medicine. Baker manipulated rural anxieties during the Great Depression, public uncertainty with organized medicine, and the lack of oversight of early radio. Baker’s cancer treatment and various other enterprises earned him an estimated $10 million before a conviction for mail fraud ended his career in 1940.

Born in Muscatine, Iowa, Baker first demonstrated business savvy as a vaudeville performer. Returning to Muscatine in 1914, Baker marketed his patented air calliaphone, a portable calliope for carnivals and outdoor advertisers. The operation soon expanded into a mail order business peddling everything from overalls to coffee. Baker even promoted an art correspondence school, despite his confession that he “couldn’t paint to save his life.”

During the spring of 1931, Baker’s crusade against preventive medicine helped to incite a rebellion in eastern Iowa known as the Cow War. His broadcasts and editorials encouraged farmer to resist state veterinarians’ efforts to enforce mandatory bovine tuberculosis testing—a ruse, Baker charged, for meatpackers to acquire cheap beef. When the standoff escalated into outbursts of barnyard violence, Governor Dan Turner called out the state militia to squelch the rebellion.

Baker’s medical demagoguery baited his critics into action. In 1931 the Federal Radio Commission shut down KTNT. A year later Baker went to federal court in Davenport to settle his libel suit against the American Medical Association (AMA) for calling him a “quack,” a “faker,” and a “charlatan.” When the jury sided with the AMA, Baker sought redress through Iowa politics. He entered the race for governor as a write-in candidate on the Farm-Labor ticket, but campaigned from Nuevo Laredo, Mexico, where he constructed a 100,000-watt radio station to replace KTNT. Always the entertainer, Baker sent campaign trucks rolling through Iowa counties with colorful banners and loudspeakers blaring speeches and carnival music, but to no avail. His efforts realized a mere 5,000 votes on Election Day.

Baker’s career in Iowa wound to a close. He returned in 1936 to enter Iowa’s U.S. senatorial race as a Republican but finished fifth in the primary. After RKO Radio Pictures discredited his Muscatine hospital in a March of Time newsreel, Baker shut it down and relocated to Eureka Springs, Arkansas, where citizens of the depressed resort town welcomed the embattled entrepreneur as an economic savior. Baker’s boast that he would make a “million dollars out of the suckers” of Arkansas came back to haunt him three years later. Convicted for mail fraud and sentenced to four years in Leavenworth Penitentiary, he never recovered. Baker lived his remaining years in obscurity off the coast of Florida in a boat formerly owned by the railroad baron Jay Gould, until his death in 1958 at the age of 75.

Tess Abney
Tess Abney is a freelance writer who was born and raised in the Quad Cities. She spends most of her time attempting to successfully raise three boys. In her free time, writing is her passion. Whether it is sharing local events and businesses with readers or sharing her thoughts on life, she finds comfort in the way words can bring people together.
Tagged: Chad BishopdocumentaryEventsMuscatineMuscatine Community CollegeNorman BakerThe Man in PurpleThings To Do