Ben Rivera has been taking steps towards a dancing career since he began treading the boards as a student growing up in Muscatine and now he’s hoping that practice and dedication is about to take him across the hallowed paths to Broadway – with the hottest show in the world.

Rivera was back in town recently to teach a master class at Momentum Dance Force and was excited to share the news that he’s being considered for a part in “Hamilton.” 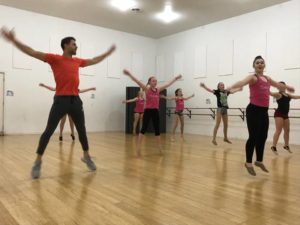 “That would be the dream, to be on Broadway,” Rivera said excitedly. “I’ve been in callbacks for ‘Hamilton’ and so we’ll see what happens. But that would be a dream show, obviously.”

Rivera graduated from Muscatine High School and then Oklahoma City University in 2014 before taking a job with Disney Cruise Lines and then moving to New York City, where he’s racked up an impressive array of credits, appearing in everything from “Saturday Night Live” to “The Pirates Of Penzance” to “Dirty Dancing” to his most recent gig in “The Bodyguard.”

“Everything I did kept growing and building towards the next thing, it was such a thrill to get Disney then the other shows, getting agents in New York City, it’s all been fantastic,” the humble and low-key Rivera said. “I loved doing ‘The Bodyguard,’ being back in New York City and dancing to music so iconic, getting to be on stage and celebrating this incredible talent.”

Dancing and acting isn’t an easy gig though, Rivera said, and not just because of the toil of finding regular work.

“Shows can be very physically demanding,” he said. “You have to stay in shape, get plenty of rest and eat a good diet.”

But it’s certainly worth it. 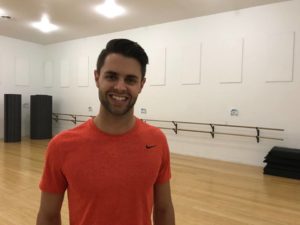 “It feels great to be doing what I always wanted to do,” Rivera said. “I’ve been wanting to perform since I was a little kid, this has been something I’ve always been pursuing.”

In addition to performing, Rivera enjoys photography and modeling and has opened businesses embracing both.

“Those are both things I really love, but my heart is always in performance,” Rivera said.

That also makes it special for him to return to Muscatine, especially to help young dancers who were once in the same position as him.

“It feels awesome, I love being home, it’s just such a happy, peaceful place,” Rivera said. “I was extremely fortunate that I met people who gave me the ability to take the steps beyond Iowa, and I love coming back home and helping others who have the same dream as I did. Anything I can pass along to them, any tools I can give them to help them to get better, I’m happy to do.”

Sean Leary is an author, director, artist, musician, producer and entrepreneur who has been writing professionally since debuting at age 11 in the pages of the Comics Buyers Guide. An honors graduate of the University of Southern California masters program, he has written over 50 books including the best-sellers The Arimathean, Every Number is Lucky to Someone and We Are All Characters.
Tagged: Ben RiveraDisney Cruise LinesHamiltonMomentum Dance ForceMuscatine High SchoolOklahoma City University