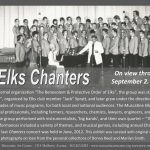 A new exhibit will be on display at Muscatine Art Center that you don’t want to miss! Muscatine Elks Chanter will be on view at Muscatine Art Center (1314 Mulberry Ave Muscatine) from Tuesday Aug 14 through Sunday Sep 2. As part of the fraternal organization “The Benevolent & Protective Order of Elks”, the group was started in 1946 as the “Men of Note”, organized by Elks club member “Jack” Spratt, and later grew under the direction of Max A. Collins to perform in decades of music programs, for both local and national audiences. The Muscatine Elks Chanters included a variety of... Read More