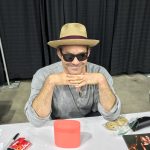 It’s been a problematic decade for Nicholas Brendan, but the actor and writer seems to be getting his life back together, traveling around the country talking about his battles with depression, which have led to alcohol problems and arrests that have tainted his legacy over the past decade. Brendan, best known for playing the wise-cracking Xander Harris on cult TV hit “Buffy The Vampire Slayer” from 1997-2003, and writing for the “Buffy” comic book since 2014, is taking steps to get his life back on track after several arrests over the past few years related to domestic violence and alcohol.... Read More