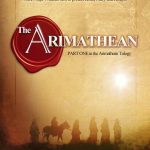 The three wise men are a staple of Nativity scenes and Christmas stories worldwide, but along with gold, frankincense and myrrh, did they also carry samurai swords? That’s the concept behind the new book, The Arimathean, which claims the trio of Magi were ninja wizards sent to protect Jesus, Mary and Joseph on the road to Bethlehem. The three warriors are joined by another Biblical figure, Joseph of Arimathea (hence the title), as they battle against Satan, King Herod and various other forces of evil. “It’s the greatest story never before told,” said author Sean Leary, who didn’t divulge... Read More