Home › Articles › Music › Strum Up Your Ukulele In Muscatine!

Strum Up Your Ukulele In Muscatine!

Former Beatle George Harrison once said that the ukulele was the only “real, true instrument,” and the Muscatine Area Ukulele Group is doing their best to make that Traveling Wilbury proud.

Founded in 2015 by musician Chris Sample, the organization of amore for the guitar’s wee little brother is a fusion of people in and around the Muscatine and Illinois City area who want to learn about and enjoy the ukulele. They meet at the Musser Public Library, 304 Iowa Ave., Muscatine, on the first and third Tuesday of each month, from 5 to 6:30 p.m., and as fate and chronology would have it, their next meeting is tonight. 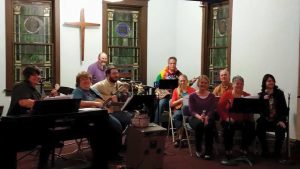 “I’ve been playing the ukulele for about six years, and I was playing with a church band when I heard they were giving lessons at the library, so I went to take the class just to meet like-minded people and we ended up founding a group dedicated to the ukulele,” Sample said. “It started off with just a few people and now we’ve got about 15 or so, but we’re always looking for new members.”

The meetings include impromptu jam sessions and classes on how to play certain songs and master the instrument, so those looking to tiptoe through the tulips to join the organization are welcome to come on out, but you don’t have to aspire to be the next Tiny Tim, you can just join for the fun and camaraderie of it.

“It’s all for fun, the ukulele is such a fun instrument that makes everybody happy,” Sample said. “It’s really easy to learn to play, just the four strings and strumming, you can pick it up really fast. It’s not as stressful as some other instruments that take a while to learn and master.”

So, what is it about the pint-sized string memorialized in so many Hawaiian-themed events that makes it epically jolly?

“I think part of it is because it’s so easy to learn, it’s not like other instruments that are more complicated, you can just pick it up and it doesn’t take long to learn songs and just to sound good playing it,” Sample said. “And it’s just such a fun-sounding instrument. It’s very happy and upbeat and has that distinct happy sound. And when you have a lot of people playing them together it sounds really good.”

The group tackles all kinds of tunes, both of the “Somewhere Over The Rainbow” classic type and the more esoteric, covering everything from pop to rock to blues to jazz and more.

People are welcome to bring their own ukes, but the library has their own impressive ukelear arsenal people can borrow.

“We’re looking forward to seeing new faces, whether you want to play or just want to listen and have fun,” Sample said. “It’s a great way to spend an evening.”

Sean Leary is an author, director, artist, musician, producer and entrepreneur who has been writing professionally since debuting at age 11 in the pages of the Comics Buyers Guide. An honors graduate of the University of Southern California masters program, he has written over 50 books including the best-sellers The Arimathean, Every Number is Lucky to Someone and We Are All Characters.
Tagged: local musicMuscatine Ukulele ClubMusser Public Libraryukulele