Muscatine A Big Part Of Life’s Puzzle For Ann Brumback

On her right shoulder blade, Ann Brumback has a tattoo of a puzzle piece.

In the middle of it is the name of her late father, John Kennedy, and intertwined within the ink of the skin art are the ashes of her late mentor and greatest influence.

To truly grasp the larger picture of her, to put together all of the interconnecting segments of her life, you need to start with that one most significant anchor, she says.

“I was really very much a Daddy’s girl, and he meant the world to me,” Brumback said. “He was always there for me and really he was and still is the biggest influence on my life.”

Brumback’s personal puzzle is one with a diverse array of pieces. 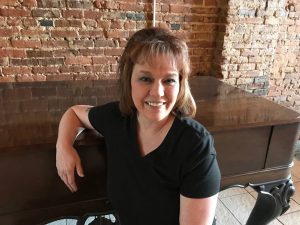 She’s been an EMT since 1995, worked as a volunteer search and rescue operator for four years, she’s worked at Allsteel, she was a recovery diver, she worked as a rodeo nurse, she’s worked in criminal justice and on various investigations, she’s a certified nursing assistant and held a plethora of other odd jobs. She’s also looking forward to working on her masters and doctorate in criminal justice at Southern New Hampshire University. She smiles when she notes that she’s distantly related to two presidents, William Henry Harrison and Benjamin Harrison.

Born in Englewood, Calif., and raised in Scottsdale, Ariz.,, she’s lived in Minnesota, Wisconsin, Missouri, Nebraska, Iowa and New Hampshire and she’s been in Muscatine for the past 11 years.

However, so many of the pieces of her trace back to the one traced on her shoulder.

“My Dad was in the FBI, so we moved a lot,” she said. “After he retired he went into computer programming and worked for Kent, which is how we got to Muscatine.”

Which she loves, but was an unusual spot for her to land, given her upbringing in California and her initial desire to be a marine biologist.

“I just always thought it would be a fascinating job, but things went in a different direction,” she said.

She became a mother and raised two daughters in her early twenties and went into the Missouri Highway Patrol, drawn to the allure of law enforcement as well as its familiarity. 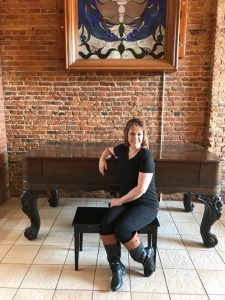 “Being around my Dad when I was a kid, I saw a really nasty accident and saw the police and fire departments there helping and doing their jobs, and that was really cool to me,” she said. “Growing up with my Dad in the FBI, I didn’t get a lot of information, with the nature of his job, but I did like that concept of helping people and being there for them. The more I thought about it, the more I thought being a paramedic, and EMT, would be cool.

“My mother said I always had that knack for helping people and calming them down during a crisis,” she added. “When I was really little, like 4 or 5, my brother, who was 2, cut his hand on a bottle, and I was the only one who could soothe him.”

She was involved in a number of different community organizations growing up and was raised to recognize herself as a citizen with something to add to the world.

“We were taught that everybody is different but everyone has something to offer,” she said. “I never judged people, I just enjoyed those differences. I followed the path of doing things and helping others and helping people change.”

One of her more intriguing jobs in that direction was as a rodeo nurse from 2000-2012.

“As you can probably imagine, riding bulls and horses, there are a lot of injuries, a lot of broken bones, lacerations, concussions, things like that,” she said. “It was fun, kinda crazy, but rodeo people are really good people, very family-oriented folks. I got into it because I dated a bull rider for 12 years. He passed away but I continued the company until I got burned out on it and it just got to the point where we were spending too much money and it wasn’t worth it.”

“I wanted to do something in the community and I was at a boat show and stopped at their booth and talked to them a while and signed up,” she said. “I’ve watched it evolve over the years and I’m really proud of them, everybody there is just wonderful and they’re doing a lot of great things in the community.”

The through line of pride runs through her descriptions of all her jobs and travels.

“I’ve always loved what I’ve been doing, everything I’ve done,” she said. “You never know what’s going to happen in life and how you’re going to change other people’s lives.”

You never know how you’re going to end up being a piece of their puzzle, you can just hope that you leave your mark, she said.

“Kind of like this tattoo,” she said, pointing to her shoulder. “I got it because my Dad loved doing puzzles and I remember doing them with him, and it’s one of my best memories with him growing up. But it means so much more to me. Kind of like how he was such a big piece of my puzzle in my life, and how we all fit into each other’s together.”

Sean Leary is an author, director, artist, musician, producer and entrepreneur who has been writing professionally since debuting at age 11 in the pages of the Comics Buyers Guide. An honors graduate of the University of Southern California masters program, he has written over 50 books including the best-sellers The Arimathean, Every Number is Lucky to Someone and We Are All Characters.
Tagged: AllsteelAnn BrumbackBenjamin HarrisonWilliam Henry Harrison