It was a cold and stormy day.

We met at Elly’s. Little coffee joint down by the river.

My associate and I walked in, took a look around.

Waitress smiled her way over.

“Nothing right now, doll, thanks,” I said. “I got business.”

He was waiting at a corner table. Back to the hard brick wall, mafia style, eyes on the door, like a guy who doesn’t want to get hit without a chance to go down with some cold steel in his mitts.

Gave us a nod. Yeah. He was the guy we were there to meet. 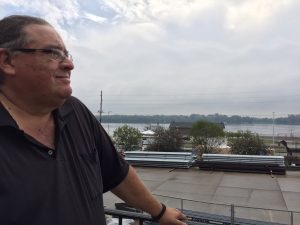 Seems this guy Clemens, he just finished writing his 24th novel, called “Executive Order,” gonna be out next year. Co-wrote it with another guy. Character named Collins. First name Max. Latest in a series about two guys solving mysteries, call themselves Reeder and Rogers.

“I recently had someone I trust very much say that it’s the best book in the series,” Clemens said. “I foresee more Reeder and Rogers books. The series has been very successful, and we like to write them as well. We’re looking forward to spending more time with them and seeing where they go.”

Speaking of going places, Clemens just got back in town. He was down in New Orleans. The Big Easy. Doing some book signings and making the scene down there at something called Bouchercon. Biggest convention of mystery writers in the world.

“When you go hang out with that many mystery writers and mystery fans, it’s way too much fun,” he said. “It’s been an interesting year, shall we say, but that’s been one of the highlights.”

Clemens grew up in Davenport. Got his start writing in school. Had bad penmanship. So, back in 1965, when he was in third grade, his teacher started giving him writing assignments at home. Took him too long to copy the stuff he was given, so he started making up his own stories. Found he could do it a lot faster.

“My parents wouldn’t let me watch TV until I finished my homework, so one day I wrote down what was in my head and I got done in 10 minutes, and I kinda thought, ‘this is pretty cool,’” he said. “I’d always been a reader, since kindergarten, and by third grade I was reading mysteries. I started reading Sherlock Holmes and that’s what led to this.” 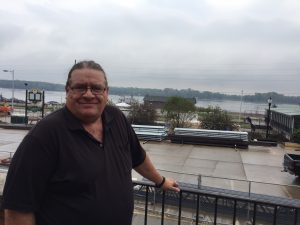 But it was a crooked path.

“Your parents raise you in Davenport in the 1960s and nobody around you is a writer, nobody makes a living as a writer, so they tell you, you can’t be a writer for a living, you have to have a fallback plan, and usually when you have a fallback plan, you fall back,” he said. “For 14 years, I worked a day job for Sears Manufacturing. Finally, I got to the point where not writing was harder than writing. I was 31 years old when I went to my first writers conference. I had heard you could actually make a living writing by then, because I read about a guy, Max Collins, who was doing that. He was a teacher at the writers conference. I went there, we became friends and eventually we started writing together.”

Been writing ever since. Last 24 years. Always crime stuff, mysteries, pretty much. Did a couple westerns, sci-fi, but always cop stuff, always crime.

“I think in my lizard brain, the reason I write is because of control, when you write there’s a chance to have control over how everything goes, to make sure there’s justice in what sometimes seems to be an unjust world,” Clemens said. “Plus, detective novels are puzzles. They’re about finding the truth. (Fellow author) Bj Elsner once said to me that writers write to reveal or conceal. For me, it’s both.

“The older I get, the more I realize I don’t know,” Clemens said. “The world isn’t black and white. Black and white is easy but doesn’t make the same connection. The world is a grayer place and I’m more interested in the shadings. I’m interested in why people do the things they do, good and bad.”

Counting appearances in anthologies and other tomes, Clemens has been involved in over 50 books at this point, including the 24 novels. He says that his goal is to get to 50 novels. But even then, he doesn’t plan on stopping.

“You never retire when you’re a writer,” Clemens said. “I talked to Mickey Spillane about this once. He said he tried to retire but he couldn’t. The ideas don’t stop. Things intrigue you. You can’t help it, you have to write about them. You have to get them out.”

Clemens got up. Downed the last of his coffee. Scanned the joint. Put on his shades. Shook my hand thanks.

“You don’t really choose to be a writer, being a writer chooses you,” he said. “This is our way of making sense of the world and connecting to it. It’s just what we do.”

And with that, he made his exit. Back into the world of mysteries. Back into the shades of gray. On a slate rainy afternoon in a tough little town hugging the river.

Sean Leary is an author, director, artist, musician, producer and entrepreneur who has been writing professionally since debuting at age 11 in the pages of the Comics Buyers Guide. An honors graduate of the University of Southern California masters program, he has written over 50 books including the best-sellers The Arimathean, Every Number is Lucky to Someone and We Are All Characters.
Tagged: crime authorsElly'slocal authorsMatthew ClemensMax Allan CollinsMuscatinemystery authors