There is a new exhibit heading to the Muscatine Art Center that you won’t want to miss!

Join the Muscatine Art Center (1314 Mulberry Ave Muscatine) for an Opening Reception for their newest exhibit, Gerberch’s Gadgetry: Re-Tooled, this Saturday Aug 4 from 1:30 – 3:30 p.m. There is no admission fee for this reception. 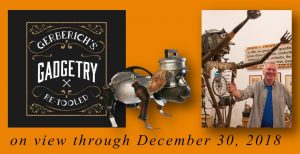 From a pack rat’s treasure trove of motors, toys, and other bric-a-brac, Steve Gerberich builds some of the most entertaining contraptions you’ve ever seen. An alchemist of odds and ends, he’s always searching for possibilities: a plastic dinosaur for this, a lampshade for that. He spins them all together in an elaborate call and response; call it a dialogue between mechanical memories and active imagination.

In the mid-1980s, with a University of Northern Iowa photography degree in his pocket, Gerberich moved to New York. The vivid images he’d been refining quickly morphed into window installations. Items that had previously been happy to live within his viewfinder now enjoyed more expanded environs, like SoHo storefronts. They now demanded motion, so Gerberich taught himself the skills needed to create a series of mechanical systems, which brought his art to life. A flock of geese might flap open- suitcase wings. A wooden cow sporting high-top sneakers might be endlessly milked by an ardent farmer. This new turn fed the artist’s muse. Almost instantly Gerbo’s world became a world of crazed kinetics.

Some of sculptor’s myriad influences are Cornell, Rauschenberg, Duchamp, Tinguely, Kienholz, and his late brother, Tim. He’s also perpetually exhilarated by music. In typical elliptical thinking, this problem-solving inventor cites the title of Paul Klee’s “Twittering Machine” as being more inspiring than the actual artwork.

The Gerberich’s Gadgetry: Re-Tooled exhibit will be on display at the Muscatine Art Center through Dec 30. For more information, visit http://muscatineartcenter.org.

Tess Abney
Tess Abney is a freelance writer who was born and raised in the Quad Cities. She spends most of her time attempting to successfully raise three boys. In her free time, writing is her passion. Whether it is sharing local events and businesses with readers or sharing her thoughts on life, she finds comfort in the way words can bring people together.
Tagged: Gerberich’s Gadgetry: Re-TooledMuscatineMuscatine Art CenterSteve Gerberich